In our effort to live healthy, eat well and avoid chemicals in our homes and diet we came across an excellent article on the hazards of flouridated water on smallfamilyfootprint.com. Please read it for the sake of your own and your family's health, you'll be educated and healthier!
"Ever wonder why most kids’ toothpastes have no fluoride? Because kids inevitably will swallow some paste, and fluoride is extremely TOXIC. In fact, eating a tube of toothpaste will kill a child (and seriously harm an adult), so be sure to keep any fluoride paste or mouthwash out of reach of little ones, just like you do with bathroom cleaners and medicines.
This begs the question:
Why are we putting a toxic chemical that everyone agrees should not be swallowed into our food and water supply in the first place?
Most people don’t know that the type of fluoride added to water supplies, toothpastes, and many beverages and foods is typically a waste product of the nuclear, aluminum, and phosphate (fertilizer) industries. The EPA has classified fluoride as a toxin. Fluoride is so toxic that, in addition to being a primary, active ingredient in rat and cockroach poisons, pest fumigants and crop pesticides, fluoride is also an active ingredient in anesthetic, hypnotic, and psychiatric drugs, as well as nerve gas used by the military.
Under the U.S. Safe Water Drinking Act, it is illegal to dump fluoride in lakes, streams and oceans, but, for some strange reason, it’s OK to dump fluoride into our food and water supplies and then rub it into our teeth and gums twice a day. Hmmmmm.
Do we really want this stuff in our bodies at all, especially when there are non-toxic alternatives that work just as well?
Fluoride Is Not Effective
You might be worried about how removing fluoride from our drinking water or toothpaste might affect our teeth, but you needn’t be.
While topically-applied fluoride can help prevent tooth decay in people who eat poorly, all of the recent large-scale studies of water fluoridation have shown that there are no proven, positive effects from the practice. None. No proof. But there is plenty of proof of harm, including dental fluorosis, osteoporosis and bone scarring, brain tumors, fluoroderma, and more. In fact, the most recent Harvard study found that fluoride exposure can impair the neurological development of children!
According to statistics from the World Health Organization, the tooth decay rates of countries which do not fluoridate their water supplies are just as low, or even lower, than those countries which do. Furthermore, several studies published since 2000 have reported that there has been no increase in tooth decay rates noted in communities which ended water fluoridation.
Fluoridation is illegal, banned or just not used in an overwhelming number of countries, including most industrialized countries. Despite pressure from the dental industry, 97% of continental western Europe has rejected, banned, or stopped fluoridation due to environmental, health, legal, or ethical concerns. And yet, their children’s teeth are just as healthy as children’s teeth in the U.S! In fact, in many parts of Europe where traditional, whole food diets prevail, they are healthier.
The good news is that the voice of concerned, unbiased science is beginning to overwhelm all the pro-fluoride industry propaganda. For example, in November 2006, the American Dental Association advised parents to avoid giving fluoridated water to babies or using it to make formula.
That’s right: DO NOT GIVE FLUORIDATED TAP WATER TO BABIES OR USE IT TO MAKE FORMULA!
Take the advice, and protect yourself and your children by avoiding the consumption of fluoride.
Here’s more about the dangers of fluoride and how to keep your teeth healthy:
The Case Against Water Fluoridation – The not-so-nice history of fluoridation, health problems caused or worsened by fluoride, and how to reduce your exposure from the many unexpected sources of fluoride in your life.
The Real Cause of Tooth Decay (and How to Stop it Naturally) - What really causes cavities? It’s not what you think! Can you cure a cavity without a filling? Yes!

If you still have doubts, this movie from the Environmental Working Group expertly sums up how and why to avoid fluoride wherever you can."

Check out this one by the Floride Action Network, another excellent video.
As stated in the video Reverse Osmosis Water Treatment is the ONLY effective way to remove flouride from your household water and help protect your family from the effects of flouridated water. Purisoft Water Solutions has the lowest price on top quality systems for your home.

Chlorine in our water, Good or Bad?

A Global Water Crisis, On Our Watch

Hello! Welcome to our new blog! If you have been checking out our website you may have noticed that we have done something a little unusual, that along with information on the products we sell and install, we have included information to help educate our clients about the Global Water Crisis affecting over 884 million people on this earth, lack of clean water. While we enjoy seemingly endless supplies of fresh water (the average North American uses 400 litres of fresh water a day!) a child dies every 15 seconds from water borne disease and lack of clean water. We feel a responsibility (and we hope you do too) to care for the lost and thirsty, to help provide life-giving water to our brothers and sisters all over the world. We have chosen Living Water International because of the excellent work they do. Since LWI started, they’ve completed more than 10,000 water projects for communities in 26 countries. They provide training programs in shallow well drilling, pump repair, and hygiene education to volunteers and professionals. LWI partners with MeSoap to help provide soap, hygiene training, toilets, water, and other needed sanitation and hygiene supplies to communities in need. This partnership began in Sierra Leone, the country with the world’s second-highest infant mortality rate.
As Christians, we have chosen Living Water International not only because they demonstrate the love of God physically, by giving desperate communities essential clean water, but most importantly they help the thirsty to experience true “living water”- the gospel of Jesus Christ- which alone quenches the deepest thirst. By meeting both physical and spiritual needs LWI empowers people, builds up communities, and brings an end to cycles of disease and desperation.
Again, we welcome you to our new blog and website, and we hope you find what you’re looking for. If nothing else, please check out Living Water International, and see the amazing work they are doing to serve those less fortunate.
Here are two articles from the LWI website for those who are interested to learn more about the Global Water Crisis and the devastating cycle of poverty for people in need of clean water... 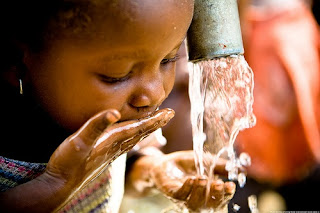 • 884 million people in the world do not have access to safe water. This is roughly one in eight of the world’s population. (WHO-UNICEF)

• 1.8 million children die every year as a result of diseases caused by unclean water and poor sanitation. This amounts to around 5000 deaths a day. (UNDP)

• LWI projects providing safe water and hygiene education at an average cost of twenty dollars per person, for a generation. (LWI)

• The simple act of washing hands with soap and clean water can reduce diarrheal diseases by over 40%. (UNICEF)

• Providing water and hygiene education reduces the number of deaths caused by diarrhoeal diseases by an average of 65%. (WHO)

• The weight of water that women in Africa and Asia carry on their heads is commonly 40 pounds, the same as the average airport luggage allowance. (UNDP)

• Water and sanitation infrastructure helps people take the first essential step out of the cycle of poverty and disease.

• At any given time, half the population of the developing world is suffering from one or more of the main diseases associated with inadequate provision of water and sanitation. (UNDP)

• At any one time, half of the developing world’s hospital beds are occupied by patients suffering from water-related diseases. (UN)

• Around 90% of incidences of water-related diseases are due to unsafe water supply, sanitation and hygiene and is mostly concentrated on children in developing countries. (WHO)

• Intestinal worms infect about 10% of the population of the developing world. Intestinal parasitic infections can lead to malnutrition, anaemia and stunted growth. (WHO)

• The average person in the developing world uses 10 liters of water every day for their drinking, washing and cooking. (Water Supply and Sanitation Collaborative Council (WSSCC))

• On current trends over the next 20 years humans will use 40% more water than they do now. (UN Environment Programme (UNEP)

• Agriculture accounts for over 80% of the world’s water consumption. (UN Environment Programme (UNEP)

• 443 million school days are lost each year due to water-related diseases. (UNDP)

• Households in rural Africa spend an average of 26% of their time fetching water, and it is generally women who are burdened with the task. (DFID)”*

* article courtesy of Living Water International- www.water.cc
“A Global Crisis Water. It is at the heart of a daily crisis faced by a billion of the world’s most vulnerable people—a crisis that threatens life and destroys livelihoods on a devastating scale.

Unlike war and terrorism, the global water crisis does not make media headlines, despite the fact that it claims more lives through disease than any war claims through guns. Unlike natural disasters, it does not rally concerted international action, despite the fact that more people die each year from drinking dirty water than from the world’s hurricanes, floods, tsunamis, and earthquakes combined.

This is a silent crisis experienced by the poor, and tolerated by those with the resources, technology, and the political power to end it. Yet this is a crisis that is holding back human progress, consigning large segments of humanity to lives of poverty, vulnerability, and insecurity.

At Living Water International, we are addressing this most basic of needs by helping deprived communities acquire safe, clean water. Our goal is to substantially ease the global water crisis while addressing root causes such as injustice, oppression, and abject poverty. As this happens, communities and worldviews are transformed—both among those in desperate physical need, and among those who have been blessed with much.”

Posted by Purisoft Water Solutions at 07:56